After preparing for months and working their way through a field of several million participating students, the top 10 geographic student masters, met in Washington D.C. today at National Geographic headquarters to compete in the National Geographic Bee. After 124 questions (including the championship round), Tine Valencic from Texas answered this one correctly to take the championship crown:
Question: Thousands of mountain climbers and trekkers rely on Sherpas to aid their ascent of Mount Everest. The southern part of Mount Everest is located in which Nepalese national park?
Answer: Sagarmatha National Park

Google is proud to support National Geographic Bee, for the 3rd year in a row. National Geographic and Google share the same passion for inspiring and encouraging our future generation of leaders and innovators to learn about and explore the world around them. Being geographically literate and understanding the world is a vital skill for students of all ages. Technology, like Google Earth, has helped make the world a more accessible place and students need geographic skills to be prepared for a global future. 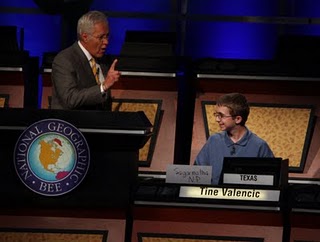 Students who participate in the National Geographic Bee finals are fourth through eighth-graders from every state, the District of Columbia, Atlantic Territories, Pacific Territories, and Department of Defense Dependents Schools. They won their school Bees that were held in thousands of schools across the US. These school winners then took a written qualifying test, which was scored by the National Geographic Society in Washington, D.C. From the school winners, the top scorers in each state are eligible to participate in the State Bees. You can learn more about the students who won their State Bees using the interactive Google Maps gadget on the National Geographic YouTube Channel at http://www.youtube.com/nationalgeographic. 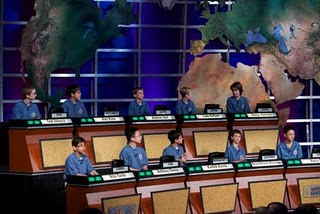 The top 10 national finalists from both 2011 and 2010 are eligible to be selected for the three-person U.S. team at the National Geographic World Championship to be held at various locales in the San Francisco area in July 2011, with the finals taking place at Google headquarters in Mountain View.

Congratulations to Tine Valencic and to all of the students who participated in this year’s National Geographic Bee. We look forward to following all of you as you continue to explore the world and we expect to see some of you at Google after you have earned your degrees.