How to track hurricanes in Google Earth

The 2011 hurricane season is in full swing, and Google has recently added a nice set of hurricane-related data to Google Earth. Simply make sure that your "Places" layer is enabled, and you'll see icons appear in the water wherever hurricanes and/or tropical storms exist. For example, here is Tropical Storm Don, currently located in the southern part of the Gulf of Mexico. 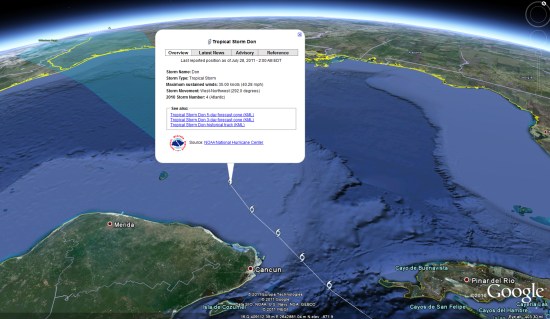 This new feature in Google Earth is quite solid, as it provides quite a bit of data about each storm, along with historical tracks and future track predictions. However, it's a bit odd that this appears in the "Places" layer; why not somewhere in the "Weather" folder? As they explain, Google is trying to make the hurricane data easier to find by leaving it in the main "Places" layer, which is likely turned on for a lot of people. Still, if people dig around trying to find it, I'd expect most will go to the "Weather" layer first.

In past seasons we've seen other great hurricane trackers, such as the one from 'Glooton' that we've used for the past five years or so. However, that tracker is no longer working, and we're having a difficult time finding any decent tools beyond the one now built-in to Google Earth.
Posted by Ivan Tasev at 1:07 PM